Originally written and published on the blog Travels with JB: Afloat On the Franklin: A River Rescued
by Michelle Fincke on May 7, 2018 in Tasmania

Powerful political symbol, demanding physical challenge, a deep well of tranquillity or unsettling Wi-Fi-free wilderness … whatever your view, rafting the Franklin is one of Australia’s great adventures.

>> image: Heading off on our adventure on the Franklin River with Water by Nature Tasmania.*

As symbols go, it’s humble and profound … and we’re standing on top it. From this remote chunk of asphalt – the size of a few basketball courts – nearly 40 years ago, equipment was mustering to survey the landscape, getting ready to build a massive dam complex on the Franklin River.

In the centre of the asphalt, faded with time and weather, a defiant -yellow-painted triangle and a declaration : No Dams. 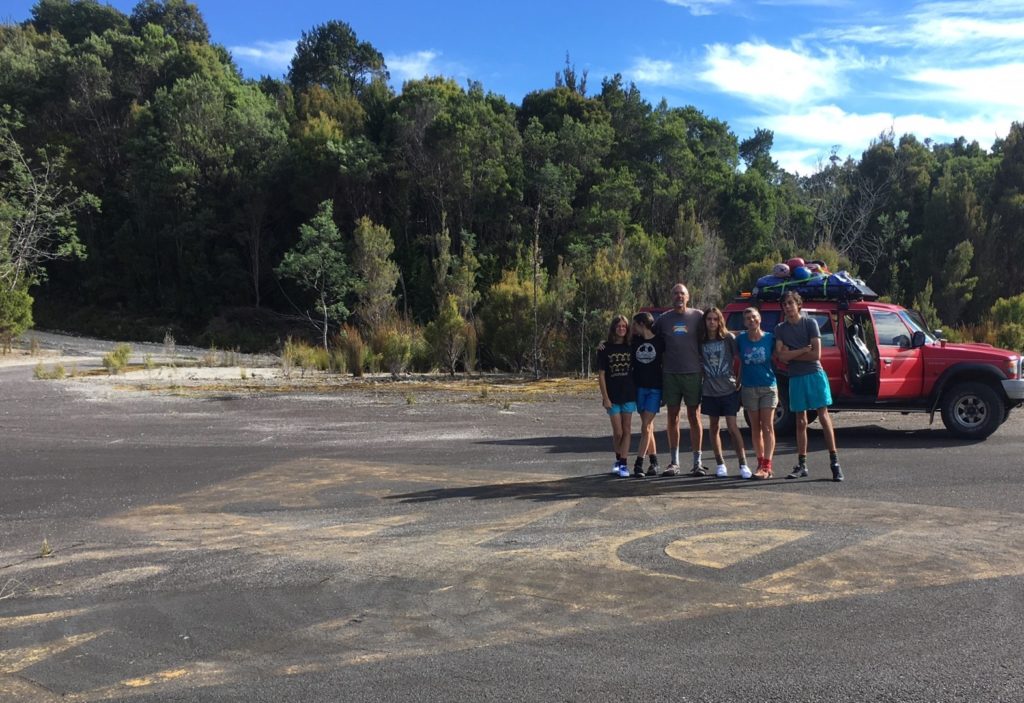 >> image: Preparing for our rafting adventure in front of the No Dam sign.*

Surrounded by dense scrub, the site represents the war between two ferocious opponents in our most celebrated environmental battle, and it’s an intense spot to start our Tasmanian Franklin River rafting adventure.

If the hydroelectric dam had gone ahead, we’d be on an entirely different journey: not just my family of six on our most challenging family holiday, but possibly all of us. The anti-dam campaign here spawned the Australian Greens Party, which became one of the world’s first environment parties with any clout. From this start, others found voice. 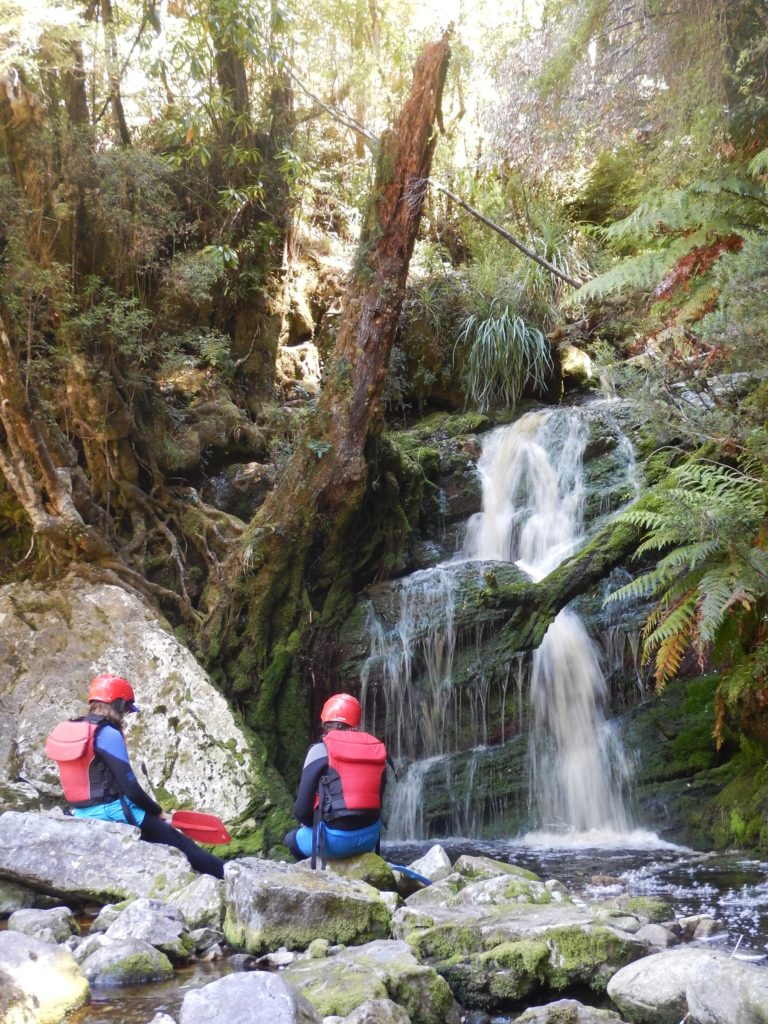 >> image: The beauty of the Franklin River.*

It feels, even to kids born in a different century, that something important has happened here. Or perhaps it’s just nerves making them twitchy as we head out of the connected world of Bluetooth and Insta into the uncertainty of the wilderness. Their father and I were drawn by the ‘away-ness’ of the Wild Rivers National Park, its isolation in a world from which it is increasingly difficult to disconnect. And of course, its famed rough-hewn beauty.

We’d opted for the short-form Franklin. Water By Nature Tasmania, the highly experienced company we travelled with, has various configurations, from taking on the entire raftable length of the Franklin over five to 10 days to the option that starts with an overnight stay in Queenstown and three nights sleeping out under rock overhangs, tarps or, best of all, the inky black sky and shining Milky Way. 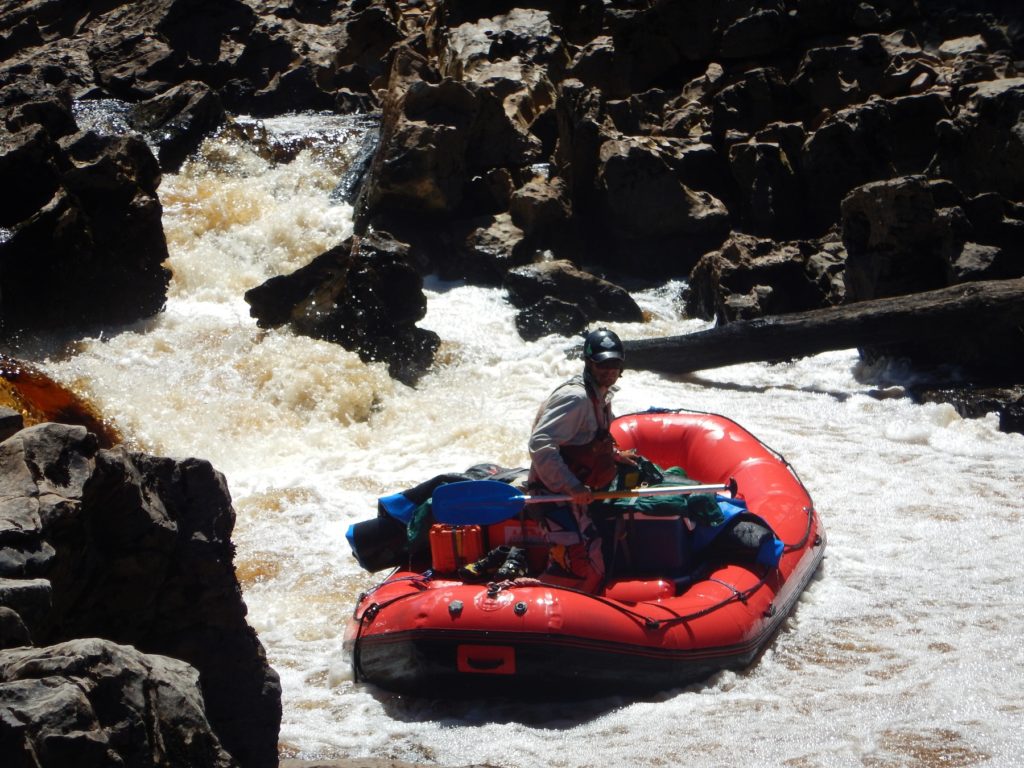 >> image: Rafting on the Franklin.*

It’s not a trip for the faint-hearted. After the exhilarating four-wheel drive trip along the Mt McCall Track to the departure point, there’s a steep, scrappy descent to the river along the rough track used by dam surveyors. Within the hour we’re encased in wetsuits and safety gear and ploughing through the whitewater as ancient huon pine and myrtle groves slide by in an adrenalin-blurred rush.

There’s a hypnotic quality to the passing landscape: we’re so unaccustomed to such vast wilderness. The hot afternoon is spent leaping from rocks into the classic tea-brown water and the night spent sleeping off the day’s exertion under the rock overhang at the Newlands Cascades rapid. 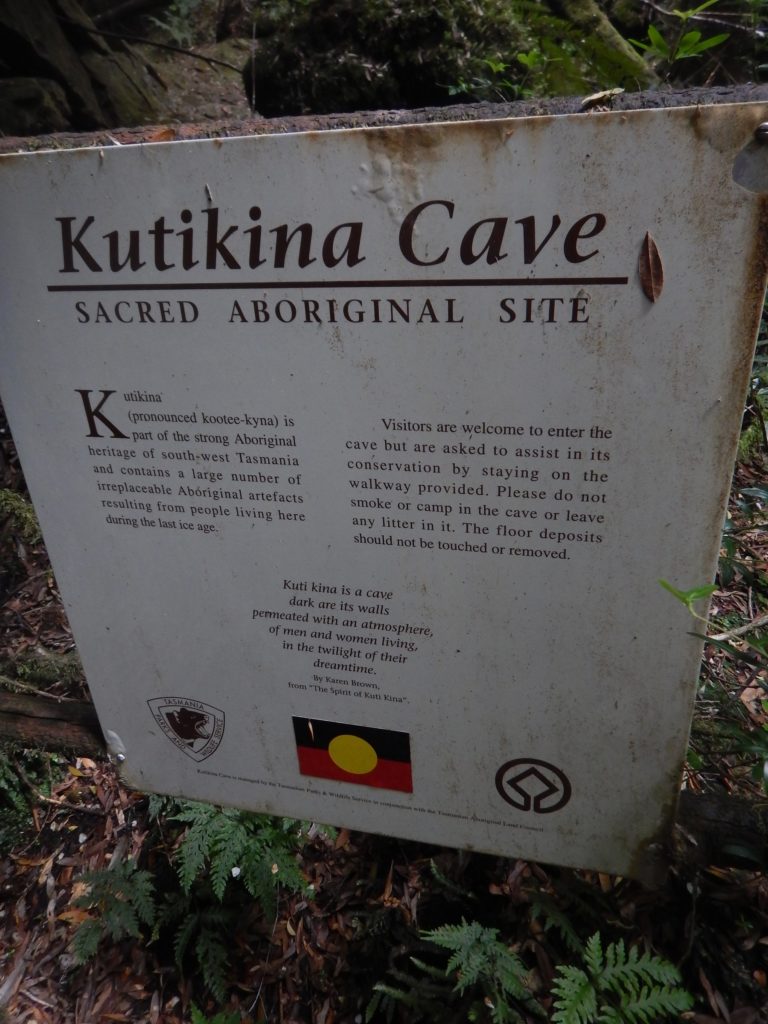 >> image: A visit to the Kutikina Cave was a highlight of our trip.*

Day two and three brought more rapids, improved in-sync paddling from our crew and excursions into the forest to visit caves – including Kutikina, full of evidence of the life of human inhabitants during the Ice Age – and cathedral-like mossy gorges.

It’s a trip less of big statements as small, memorable moments: swimming in fast-flowing water at iconic Rock Island Bend, the subject a famous wilderness image by photographer Peter Dombrovskis; watching a platypus play and a snake zig-zag its way from bank to bank; an evening’s swim among rock columns and tangled curtains of moss; the appearance of a most welcome gin and tonic, conjured from an unpromising river barrel while darkness descends over the campsite. 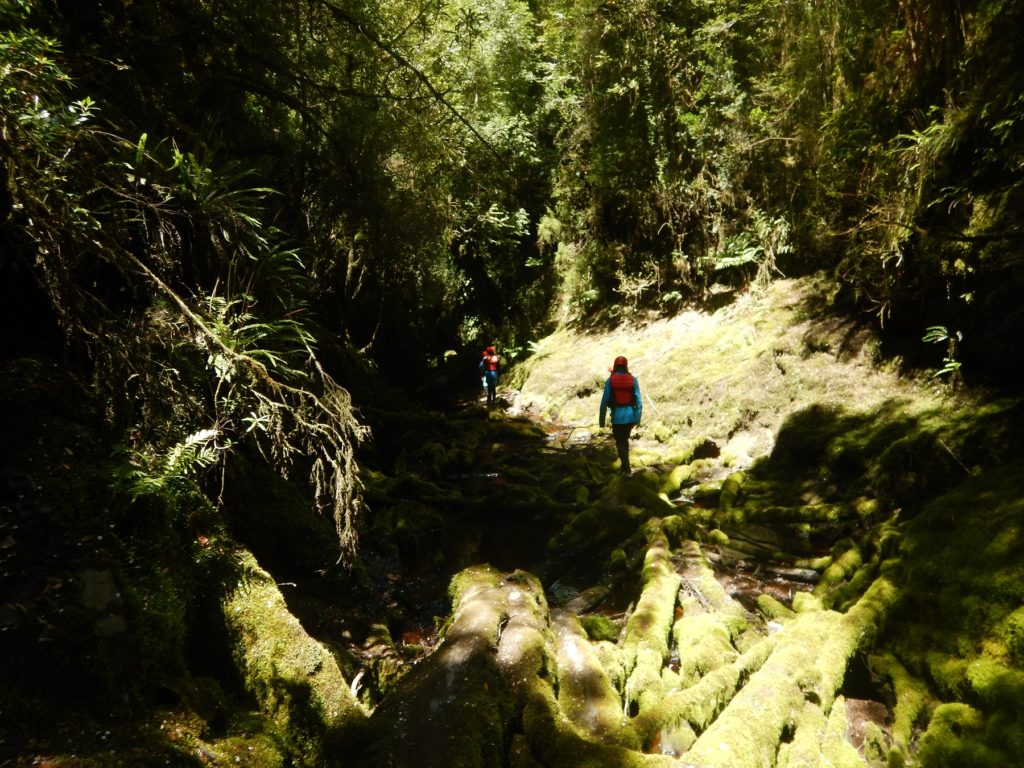 Guides Scotty and Jim keep us motivated with banter, a barrage of questionable jokes and entertaining outdoorsy war stories, and after a day spent wrangling rafts down rapids, they backup impressively as chefs producing entrees of Tassie cheeses and nibbles and hearty dinners: curries, steak and veg and comforting pasta.

As the rapids dwindle on the Lower Franklin and the river widens into laconic middle age, paddling becomes more demanding and more than one teenager in my boat was heard to grumpily wish the river had been dammed. Gallows humour, a balm for muscles not usually up for such hard work. 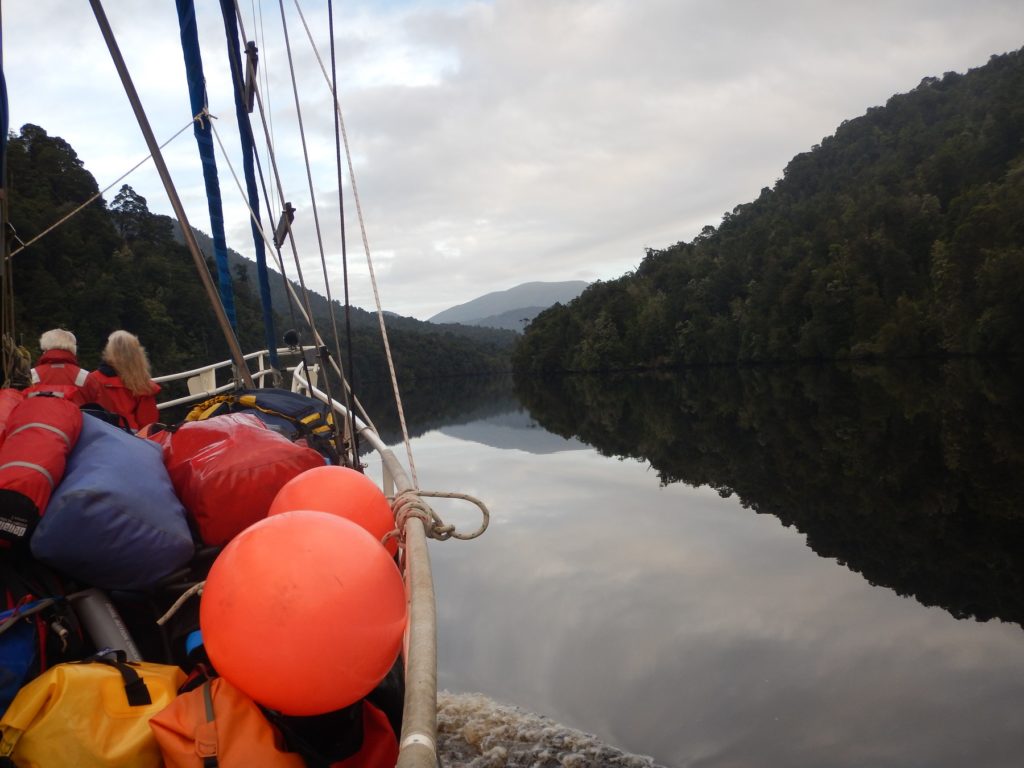 >> image: Leaving the Franklin on the yacht, The Stormbreaker.*

After three nights spent camping out, the dawn brings the yacht The Stormbreaker and a tranquil six-hour motor down the Gordon River and across Macquarie Harbour to Strahan: back to pies, lattes and the digital world after a break that could only have done us all good.

Visit the Water by Nature Tasmania website for more information on rafting on the Franklin.


Originally written and published on the blog Travels with JB: Afloat On the Franklin: A River Rescued
by Michelle Fincke on May 7, 2018 in Tasmania
*Photo credit: Michelle Fincke

Michelle and her family joined us on a 5-day Lower Franklin River Rafting trip. For more information about a Franklin River rafting trip contact us on 1800-1111-42 or email on rafting@franklinriver.com.